TikTok, Twitch, and Instagram all offer fierce competition to YouTube on the live video front. But, YouTube clearly plans to stay in the game…and those plans involve new features heavily influenced by its competitors. After all, imitation is the sincerest form of flattery, isn’t it?

In one video posted on the company’s official Creator Insider channel, YouTube showed off five new features – Go Live Together, Live Rings, Cross Channel Live Redirects, Full Screen Mode and Live Q&A – specifically related to live streams coming to the platform . Some of these features may look very familiar to users of other live streaming platforms.

Have you ever wanted to invite another YouTuber to join you on your stream? Go Live Together is a new YouTube live streaming feature that makes it easy for creators to invite a guest to join them on a mobile stream by simply sending a link to the other user.

Go Live Together makes it easy for creators to invite a guest to their live stream.
Credit: YouTube

If this sounds like a feature you’ve seen before, you may very well have it. Both TikTok and Instagram provide similar tools for creators to easily bring guests to the screen for their live streams. There are also third-party platforms that bring similar functionality to YouTube, but the company integrates these live invitation capabilities directly into its own platform.

The live stream host will have access to analytics and will be able to monetize the stream as they would any other video content uploaded or streamed live.

Go Live Together is currently being tested in a small pilot program for creators. The ability to invite a guest to the screen is currently restricted to those streaming via a mobile device.

What’s the best way to let users know their favorite creator is online? Just put a ring around their profile picture. Platforms like TikTok and Instagram are already doing just that. 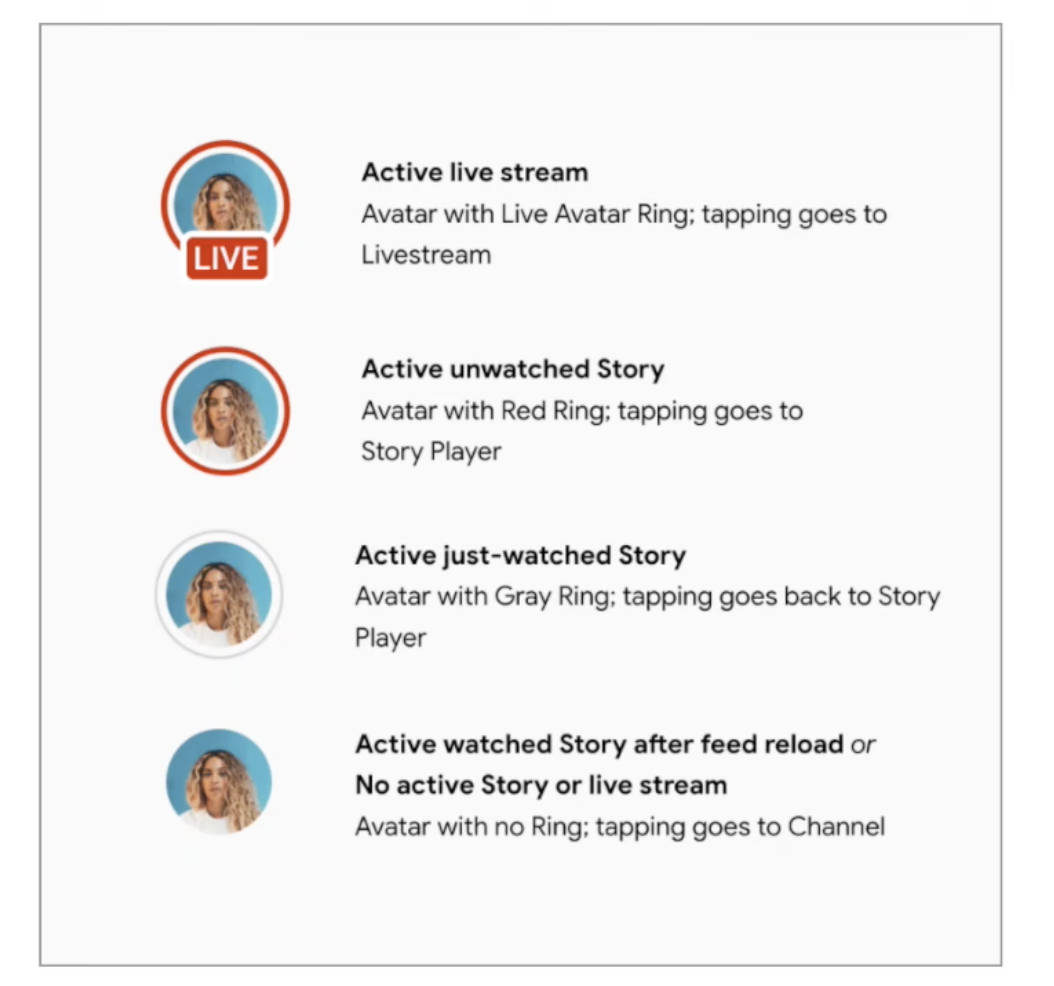 Live rings will display when a creator is live.
Credit: YouTube

And now YouTube will join them. The video giant will soon put a red ring around users’ profile avatar if they are currently live streaming. If a user taps on a photo with a live ring enabled, it will be sent to a live stream.

YouTube plans to roll it out to mobile devices first, but this feature will come platform-wide soon after.

One of the best ways to promote your Twitch channel is to share your viewers with another streamer after your live stream is over. On Twitch, this is called a “raid”.

YouTube uses a slightly less catchy name for its own version of this feature, “Cross Channel Live Redirects”.

Basically, if a creator has at least 1,000 subscribers and no Community Guidelines strikes are active, they will be able to redirect their viewers to another channel’s live stream or first video. (A first video is an uploaded YouTube video that plays with a live chat for its first scheduled public viewing. It is then viewable like any other uploaded video on the platform.)

However, cross-channel live redirects will be a bit different from Twitch raids. Some Twitch streamers have weaponized the feature, known as “hate raids“, sending their viewers to harass other creators. YouTube will only allow a YouTuber to redirect to creators who endorse their channel or are already subscribed to it.

YouTube is also working on a new screen layout for mobile live viewing.

Known as full-screen mode, YouTube takes a split-screen approach, giving viewers the ability to watch a stream with video and live chat side-by-side. The feature will offer users a choice of two options. In “lean mode”, the video will appear on the left side of the screen and the live chat will sit on the right. In “lean back mode”, the video will occupy the entire screen of the mobile device. A live viewer count will appear in the bottom right of the screen and provide viewers with previews of key chat moments, such as creator polls. If a viewer taps on the viewer count, YouTube will go into “lean mode” with split-screen live video and chat. Of the five new features, fullscreen mode is the first that YouTube users are likely to notice. According to the company, the full-screen mode will launch next week.

If you have any questions for your favorite streamers, they might be easier to answer in the near future.

Live Q&A is coming to YouTube Live Streams, allowing viewers to submit questions to a live broadcaster while watching their stream based on the creator’s prompt. Questions will be pinned to the top of the live chat so creators can easily follow them and viewers can follow along.

YouTube already offers live streamers the ability to poll their viewers in live chat. It makes sense that they would roll out similar options to further facilitate engagement between a streamer in an audience.