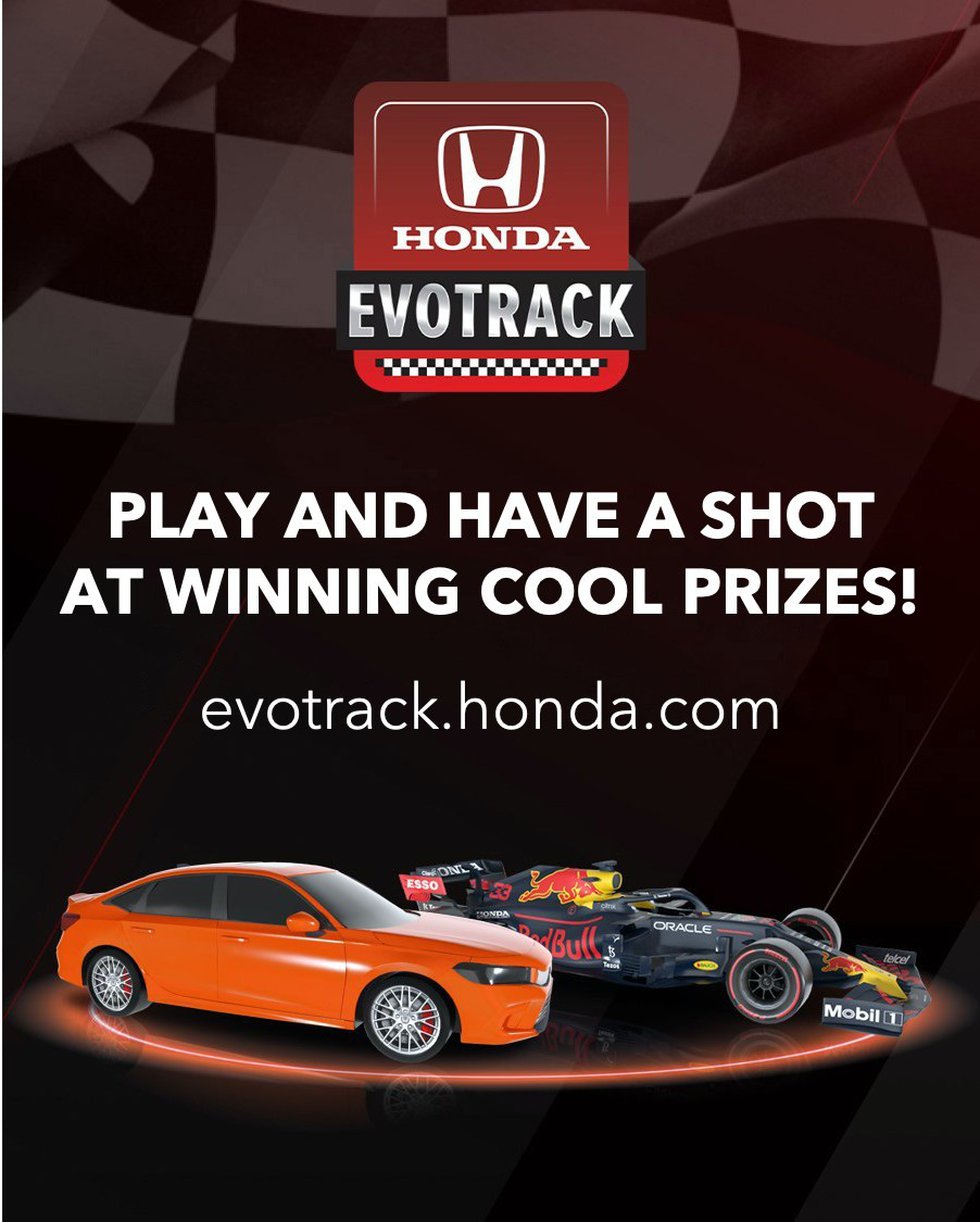 TORRANCE, Calif., Oct. 19, 2021 / PRNewswire / – Honda takes fans to the virtual track with the launch of a new mobile game, “Honda EvoTrack”: evotrack.honda.com. Fresh off its global debut today, the all-new 2022 Civic Si will be showcased in Honda EvoTrack, where gamers can virtually experience Honda’s newest member of the 11e-generation Civic family. In addition to the fun and all-round Honda EvoTrack experience, the Red Bull Racing Honda RB16B Formula 1 car, joined by the recently launched 2022 Civic Sedan and Hatchback, and the legendary 10e-Generation Civic Type R.

To take it one step further, Honda EvoTrack players can compete to win a special prize each week, in a four-week ranking competition. The game is free on mobile and desktop devices.

“The launch of the new Honda EvoTrack mobile game brings fun and friendly competition to our customers and players of all skill levels as we introduce them to our all-new Civic lineup that is even more fun to drive in an accessible and social way,” said Phil hruska, Media Officer, American Honda Motor Co., Inc. “Honda has a long history of integrating vehicles into many types of games, and we want to build on that momentum, especially for avid Honda fans. Civic. “

How to play Honda EvoTrack
Honda EvoTrack game is designed for players to complete as many laps as possible without hitting obstacles or missing turns. The more you advance, the more you score. On the track, several boosts are available and players can collect coins to unlock their next vehicle and access more colors or Red Bull Racing Honda themed liveries.

There are three routes to choose from, including a Red Bull Racing themed installation – “Circuit”, a rugged Route 66-style site – “Desert Trail” and a futuristic “Neo City” where modernity meets tradition.

To warm up the virtual gaming competition, Honda is hosting a four-week contest from the campaign launch. Players with the top three scores of the week will earn a digital voucher to purchase officially licensed Honda or Red Bull Racing products. The leaderboard will reset every week, giving new challengers the chance to compete for prizes.

Honda EvoTrack was developed by the digital fan engagement agency, Wave, and in partnership with Red Bull Racing Honda.

11e-Generation Civic Si
Honda’s new EvoTrack mobile racing game adds a fun and interactive element to the launch of the all-new 2022 Civic Si, which debuted today as the most maneuverable, best-equipped and fun-filled Civic Si in the world. drive all the time. The Civic Si 2022 adds new impetus to the hugely popular Civic Sedans and Hatchbacks already on the market and sets a new benchmark for compact sport sedans with an updated turbocharged engine, standard revving manual transmission and sport suspension. Learn more about the all-new 2022 Civic Si here.

Honda and games
Honda has a long history in video games, partnering with some of the best-known gaming franchises on various platforms. For the past decade, Honda Civic has been a part of Forza, Guitar Hero Live, and Hearthstone Team Brawl. In 2019, Honda significantly expanded its presence in games and esports, becoming the exclusive automotive partner and official automaker of Team Liquid and Riot Games’ League of Legends Championship Series in North America. In addition, Honda has a dedicated game channel on Twitch. Through Honda’s gaming partnerships, the brand aims to grab the attention of young audiences behind the explosive growth of esports. These deeply enthusiastic fans share a similar passion for Honda, as Honda is a leading brand with first-time buyers, and Millennial, Gen Z and multicultural consumers.

Honda and Red Bull Racing
Red Bull Racing and Honda have joined forces in Formula 1, starting in the 2019 season. So far in the 2021 season, the Red Bull Racing Honda team have won eight races, with Max Verstappen take the checkered flag in seven races, and teammate Sergio Perez with 135 points including one victory, putting the team in contention for the constructors’ championship.

About Honda
Honda offers a full line of clean, safe, fun and connected vehicles sold by more than 1,000 independent Honda dealers in the United States. Honda has the highest fleet average fuel economy and the lowest CO2 according to the latest data from the United States Environmental Protection Agency (EPA). The Honda lineup includes passenger cars from the Civic, Insight, Accord and Clarity series, as well as the HR-V, CR-V, Passport and Pilot sport utility vehicles, the Ridgeline pickup and the Odyssey van. Honda’s line of electrified vehicles includes the Accord Hybrid, the CR-V Hybrid, the Insight Electric Hybrid Sedan, as well as the Clarity Fuel Cell and the Clarity Plug-In Hybrid.

Honda has been producing automobiles in America for 38 years and currently operates 18 major manufacturing plants in North America. In 2020, more than 95 percent of all Honda vehicles sold in the United States were manufactured in North America, using parts of national and world origin.

More information on Honda is available in the Digital Information Book.